My great uncle, Joseph C. Bergling of Maryland, was an aviation pioneer, writer, and historian. Joe married my grandfather's sister, Ruth Bowling. I had the pleasure of spending time in his library, crammed with aviation memorabilia, as a kid and I remember it clearly to this day. One of his adventures that fascinated me most was the test flight program of an inflatable rubber glider designed by Taylor McDaniels and patented in 1933.

The best source of information I have found on the McDaniels glider was an article by Ernest Stadvec in AOPA Pilot Magazine entitled "The Inflatables". A photocopy was in Joe's files, and it tells the tale s of both the McDaniels glider and the Goodyear Inflatoplane that followed. 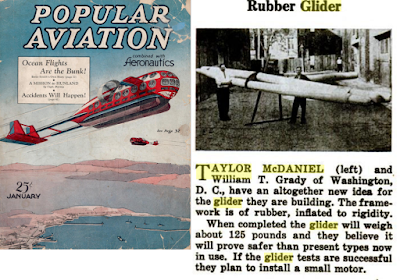 Taylor McDaniels was inspired to design an aircraft that would fold, flex, and bounce upon crashing,. This idea was the result of a plane crash that killed one of his friends. McDaniels and a partner started a small airline in Brazil, and one of the aircraft crashed on the first test flight after being assembled. His friend, the pilot, was killed, and the mechanic injured. McDaniels began work on the rubber glider in 1928, and filed for patent in 1930 The full patent is viewable online (US 19052008)  He returned to the US to be closer to the patent office and aviation resources. 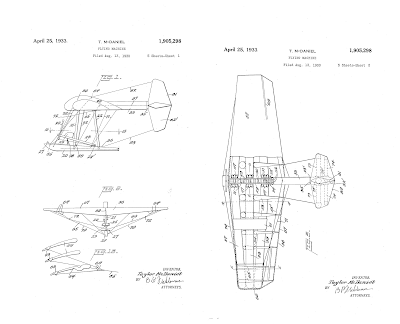 Illustrations from the patent 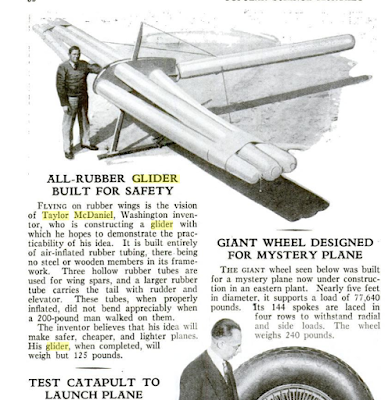 Joseph C. Bergling was an experienced glider pilot and a friend of McDaniels. His first flight in the new machine was on 4-Jan-1931. It was the first flight of an inflatable rubber tube aircraft in the world. It was successfully flown twice that day. Another four successful flights were performed by Joe on 9-Jan-1931. Two days later, a film crew was invited to record the flights, to be shown at movie theaters and in newspapers. 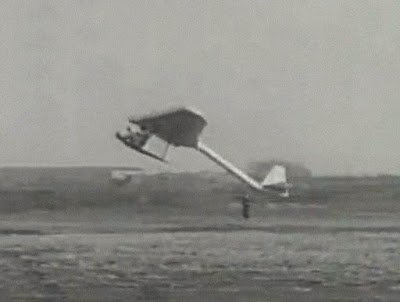 The first flight of the day was successful, being towed to an altitude of 100 feet by a truck and released. The aircraft showed signs of being nose heavy, but landed safely. McDaniels considered aborting further flights on order to make adjustments, but Joe convinced him it was ok to fly On the second flight for the cameras, the plane was released at 80 feet, and Joe was unable to control the aircraft. It struck the ground, wing first, which collapsed the wing. The nose struck the ground next, and the wing returned to its normal shape. Joe jumped out and waved his arms to let the film crews and McDaniels know he was ok. He suffered bruised and a twisted knee, but was otherwise unharmed. The aircraft suffered only very minor damage. 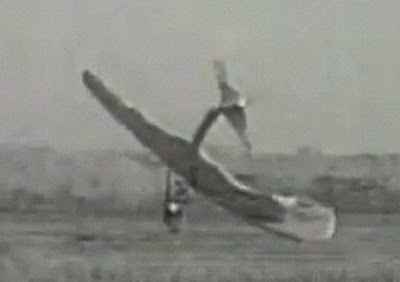 This crash sequence is featured in the film "Those Magnificent Men and Their Flying Machines". Joseph Bergling's papers indicate that the flight footage was shown in theaters around the country. 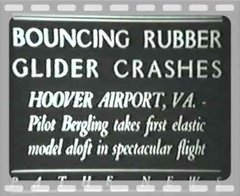 The concept of a plane which was safer was thus proven. McDaniels dismantled the first test glider to use the materials for a second, larger aircraft. The design mimicked the shape of a sea bird. There is no evidence it ever flew. Joe's involvement appears to have ended with the eighth and final flight of the prototype.

There were other attempts to build rubber airplanes. The Goodyear Inflatoplane was designed to be dropped on a pallet to downed military aviators, and could be inflated and ready for flight in minutes. 12 various test models were built, and the program cancelled in 1972. The photo below shows one flying in the Akron, OH area. 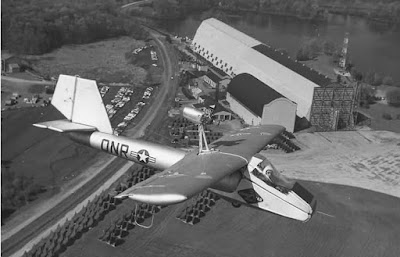 Experimental inflatable airplanes were built in England, and one particularly strange proposal was to the use jet powered inflatables to deliver nuclear warheads. The logic was that they could be transported and deployed from rail cars, and would be difficult to detect in flight at low altitude due to their low radar cross section. The following Washington Post article is a scan from Joseph Bergling's papers. A full size scan of the scan is available here. 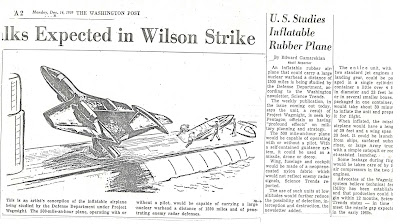 Discussion forum using the airplane as an identification challenge, where I learned what model he flew. Family lore referred to it as "the rubber airplane".  I also got the cinema image from this thread.

Excellent article, which goes into great detail on the Inflatoplane, and where I obtained the flight and crash images of the McDaniels glider

Article where I learned of the patent of the McDaniels aircraft